A Creative Team. A Creative Approach to Adopting a New PM System.

A Creative Team. A Creative Approach to Adopting a New PM System.

Our staff had a love-hate relationship with our old project management system. They struggled with its lack of flexibility, but they knew how to use it and it served as the central hub of our business for almost 15 years. So when the time came to evaluate new software packages and make a clear but painful change, we brought our own in-house creative talent on board to drive the process through every step.

We started with a simple mantra: Change is easier when it's expected, respected and fun.

With this foundation, we started early and built buy-in from the start: a cross-functional team evaluated software packages, and we publicized that fact internally from the beginning, soliciting "must have" and "nice-to-have" features from Creative Network (CN) team members. Once the evaluation team chose the new system, a different team oversaw development. In each case, influencers within the team who understood our business and were respected by their peers led the process.

That respect goes both ways: when the initial development phase took longer than anticipated and we had to extend our milestones for completion, we did so openly and transparently, explaining, "Our business is just too important to risk changing until our new tool provides everything we need." That built confidence that we were committed to giving the team the right tools. When we were ready for the next phase, we assembled a team from our talented group to create an internal awareness campaign that explained the new software. Our "Lunch and Learns" and deeper training sessions used the talents of hand-picked instructors. By putting our own highly creative team on this internal project, we leveraged our own forces and brought nearly everyone on board in a meaningful way.

And of course it's important to have fun. To build awareness, we held a naming contest among our team for our new system, and C3 (Collaborate. Create. Connect.) emerged as the winner. Riffing off the imagery of birds in flight and using the tagline "Taking CN to new heights," one of our team members created origami cranes and hung them as mobiles above team members' cubes as they were trained. One month before launch, we printed large posters with funny and entertaining "countdowns" to the new system's Launch Day.

Replacing the comfortable but antiquated project management system that our team relied on for so many years could have been--to put it bluntly--a train wreck. But we found a smoother way forward by assigning our own creative and key staff to the management team, fostering mutual respect and finding the fun in the process. 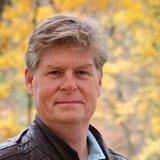 John is Director of Creative Network, AbbVie's in-house agency, a 50+ person group that provides a full array of creative services, as well as meeting production, conference services and several shared services. In his diverse career, John has experience as an engineer and lighting consultant, Regional Director for a global nonprofit humanitarian organization and co-owner (with his wife) of a successful architectural design firm. These experiences, along with an MBA, help John manage Creative Network like his own business, housed within AbbVie.