An Outsider’s Inside Perspective: An Interview With Mike Papson

An Outsider’s Inside Perspective: An Interview With Mike Papson

I'd venture to say that most creative team leads did not come into their roles by way of what would be considered a traditional business path. Most of us went to school to become designers, writers, art directors, etc., went into those professions. Then at some point found that we were good at managing people and businesses (or the organizations we work for recognized that aptitude in us), and we moved into leadership positions. While this affords us an in-depth understanding of creative services and its associated best practices allowing us insight critical to our teams' success, it leaves us with a potentially crippling blind spot when it comes to more high-level operational and financial knowledge and practices and how to apply them to our businesses.

Fortunately for me, as part of The BOSS Group's engagement at Merck Pharmaceuticals, I've had the opportunity to partner with Mike Papson, the Director of Merck Creative Studios. Mike's experience is decidedly more on the business side than mine, having taken on key roles in the management of a variety of shared services teams such as Meetings, Travel and IT. I asked Mike if he'd share some of his insights coming into creative services from this less travelled route, and he graciously agreed. This is the first in a series of posts drawing from an interview I had with Mike about the business of in-house. His perspective of being an outsider to the creative space provides some interesting insights.

Andy: What are some of the differences that you notice between the creative services business and other businesses that you've managed in the past?

Mike: There are definitely a couple of differentiators. When you think about the other departments that I was part of, structure and controls were very much a part of their fiber and culture. When I came into the creative team, [I learned] that's not their first passion in life. They're more about thinking outside the box, being more passionate about what they do, really wanting to deliver the best, maybe regardless of what the financial impact or timing might be, because for them it's all about the creativity and about the passion of what they're trying to do with their client.

I think some of the challenges those priorities brought to the team were you had a whole different mindset and a different culture that those individuals live and thrive in. For me it was a matter of, "How do I take some of that structure, that process, and metrics and governance that worked in other groups, and bring that to the Merck creative team?" And that was tough because you don't want to go in either direction to any extreme, because I think if you bring too much of it in, you could stifle the team's creativity and the growth of the department. On the other hand, with a lack of some structure and process and control, you could have a team running a little bit amok and maybe not providing the value that is needed for the company as a whole.

Andy: Were you surprised at the lack of structure in the group when you first came into the team, or you were expecting that?

Mike: I was expecting that, only because I was already close to the group ... It wasn't like I was coming totally from a different organization into the team. I was part of the same service management group at Merck as the Studio. I understood the journey and where you were at here in Merck Creative Studios and what some of the challenges were. I knew where we were at and what needed to get done prior to coming into it.

Andy: Even with all that, were there any surprises once you literally were managing the team?

Mike: I would say yes. Hearing about the group is one thing. But yes, getting injected into it and really seeing it and understanding it, and living it day to day, is a little bit different. In the beginning, I came in very strong-handed on some things. Then as I learned a little bit more about the process and the way the creative team works, I was able to back off on some of those initiatives--backed off maybe on some thoughts I had of how things should be done and change with the reality of how the team operated. So when I came in, I learned a lot too. It was taking those learnings and readjusting what my thought process was on what needed to get done and how to get it done.

Andy: Could you speak to specific situations where you were like, "Okay, I've got to readjust how I'm going to manage this. It's a little bit different than the way I've managed this in other teams, because the culture's different here"?

Mike: Yes. One issue, which I think we both are aware of, is utilization. I came in very much trying to drive utilization as high as I could, because obviously that goes right to the bottom line, and there's a financial benefit to doing that. As we started to do that though, we got to a point where it began to have a negative impact. I think we got to a point where we maximized on it. To continue to drive beyond that point was really going to be a negative drag on the business, because it was impacting people's creativity, the ability to maybe manage the work more effectively and utilize people differently and how we structured the teams. De-emphasizing it a little bit and maybe looking at it more as an aggregate target, as opposed to individual contributor targets helped.

Another area was the creative process. When I think about the things our art directors do like concepting, it's not so easy to put numbers to that or draw a box around it. It's not an easily defined thing. Sometimes it could take longer. Sometimes it could be quicker. Then it's all on how it gets perceived, too. It's not easy to say, "Okay, this is a creative piece of work," just because the person creating it thinks it is. Is it being perceived by the person who bought it as being a creative piece of work, what do others in the industry or upper management think? I believe it becomes a little bit more challenging to judge the creative. In the other jobs I was in, it was a little more black and white in a lot of areas.

Andy: What the deliverable was?

Mike: Yes, what the deliverable was, and how we evaluate it, and whether someone met expectations. It was easier in other groups to define those very clear line metrics and reporting. Here, in some cases, it becomes a little bit fuzzy, it's not black and white.

Part two of the interview will delve into defining creative team goals and operational management tactics. What I believe is interesting in part one is Mike's discovery and acknowledgement, even with a wealth of metrics and accountability expertise, that quantifying creative and imposing rigid structure on a creative team can, at times, be difficult and even counterproductive. The key takeaway is the need to strike an effective balance between the creative process and needed financial and efficiency controls. 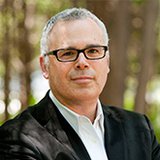 Andy has worked in the in-house creative services space for over 35 years, successfully building and leading both small and large multidisciplinary teams in a range of industries. By leveraging both creative and operational expertise, teams under Andy’s leadership have consistently exceeded established KPIs and outperformed peer groups in the industry. He even cofounded InSource, a nonprofit dedicated to supporting in-house creative teams. It should come as no surprise, then, that Andy has published The Corporate Creative, one of the few books specifically focused on the in-house professional.

In his spare time, Andy is a self-professed sci-fi geek with a fascinating hobby of building clocks out of found objects. Also a daring foodie, he loves to try out dishes from different countries and cultures.