Abraham Lincoln once said that a lawyer who represents himself in court has a fool for a client. It might be fair to say the same of an author who refuses feedback on their work. Often, our internal clients may be insistent that we not touch their writing at all, but I think we can all agree that just as often, that's not in anyone's best interest.

I've seen content creators get so caught up in their ideas, dig their heels in so much, that they ruin their message - or just plain miss typos or other issues that would be obvious to an objective observer.

If we're going to truly have our clients' best interests at heart, we must convince them to allow for some flexibility and collaboration. Once you're past that hurdle, though, who is the best person to perform that independent review? While in a previous post, I wrote "If you need someone to look for typos, punctuation, and logic flaws, you're looking for a proofreader. But if you want someone who can make those facts seem less dry, or whip a bunch of bullet points into a few paragraphs, invest in an editor," there are times when a team's structure may not accommodate that. Someone with a fine eye for detail, like a project manager or designer can be great alternative, although it's important to remember their core responsibility or the quality of the proofreading could suffer.

An overlooked part of the value of a dedicated proofreading resource (proofreader or editor) is objectivity. Although I've stressed that a great proofreader keeps the bigger picture in mind, unlike many other team members, they are in a position to look at the trees first and the forest second.

Another key element is that proofreaders are very rarely decision makers, especially for changes that might alter the meaning or tone of a work. Their job is to provide objective information to the decision makers - clients, account managers, creative directors - so those people have the right information. This frees the proofreader to provide a valuable perspective that might otherwise be lost. Rather than being colored by what's on message or whether a poster is visually balanced, they can focus on questions like "Does this read well?" and "Does this make sense?"

If we include editorial research in this, it ups the ante even more. I worked on one project where the client wanted a series of motivational messages developed around historical changes in thinking. We've all heard the quote from that head of IBM in the 1940s, right? "I think there is a world market for maybe five computers." What an ironic and fascinating point of view. Problem is, there's no evidence that Thomas Watson (or any employee of IBM) ever said it! In fact, while our editors were working on the messages, they identified that about 25% of the ideas submitted were unsubstantiated or outright wrong.

The client chose to move ahead with some anyway, but others were cut from the list to avoid potential embarrassment. Had the client viewed their list of ideas an untouchable, their end result might not have lived up to what they were seeking.

To me, that's a great example of how the system works best, with a truly objective party - a proofreader or editor - not only correcting mistakes but also offering value. The client, the decision maker, can determine how they want to act on that information, but on the occasions that the decision maker doesn't want to at least consider the opportunity to improve their work, I have to wonder if, to paraphrase Abraham Lincoln, I have a fool for a client.

Or maybe President Lincoln never actually said that. I should probably have had someone look into it for me... 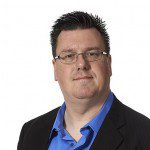 George Krubski is an Associate Studio Manager at Merck Creative Studios (managed by Cella). In this role he oversees an editorial team of thirty, a focused design team, and output services. He supports operations and implementation of studio-wide initiatives. George has two decades of experience as an editor, writer, and manager. He has helped build, rebuild, or develop editorial teams at a half-dozen organizations.